In my first few years of teaching I will never forget a real time American history lesson that has always stayed with me.
In the early nineties in an urban setting of a largely African American elementary school we were knee deep in the study of the Bill of Rights. It was spring, fifth grade, and we were already a close knit family working together, sometimes bothering each other, but mostly helping each other.
I can remember it like it was yesterday. We had circled our desks at the end of the day and were processing all that we knew about the Bill of Rights.  It was during our discussion, a student Yvette shared animatedly about a man who approached her that morning at the B.A.R.T. station, (our local mass transit system) and was not only spouting speech but was also passing out literature that she didn't understand.   A wise 11 year old, Yvette was astute enough to sense that it might be hate speech but wasn't sure.  She wanted her classmate's help.  Yvette produced a highly derogatory flyer out of her desk and asked, " Miss S what did the man mean by this?"  The hand out she produced was indeed racist, and hateful.  The man that passed it to her actually said something more of the same but it was subtle and full of innuendo. The kids watched my face and I remember I fought to hold back tears.
"Miss S!  He is down there everyday.  Go down there with me today after school.  We can stop him from doing this, and have him arrested!"
I collected myself, and spoke as clearly as I could.  I believe I said something to the effect of  the first amendment was there to allow Americans to say good things, as well as bad things.
I'll never forget their slow, but gradual nodding in tandem as they finally understood the first amendment and what it entailed.  One by one, in that circle of universal desks, the clarity was apparent. More importantly, the look on their faces has always stayed with me.  Some days there are no golden moments in teaching.
Posted by Morna Gersho at 8:12 AM 1 comment: 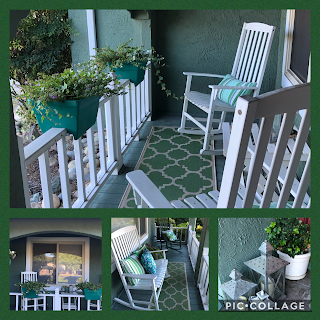 I am a transplanted Southerner through and through.  Both my parents were born and raised in North Carolina and although I hail from northern California near San Francisco, and eclectic Berkeley,  I still consider the blanket of pines in the aerial view from my plane window at RDU, "home."
In my humble opinion, you just really haven't lived until you have had a holiday meal with my aunt.  I really think my aunt could easily have been the inspiration for the restaurant, "Hometown Buffet." Her holiday spreads are tables' where there are endless food choices, and the selections of cakes, and pies seem to go on forever.
Diversity?   The city of Raleigh boasts well manicured green velvet lawns, and nights that are as warm, and wet as the mornings.  My aunt and uncle's farm in rural Chapel Hill has rich, orange dirt much like California's adobe, as far as one can see.  The south is still the kind of place where you can get lost, ask for directions, and they will help you with both a smile, and a thick southern drawl.
North Carolina porches are hard to leave. Despite knowing that all the world's problems can't really be solved there,  it's almost worth a try in a rocking chair, with a cold glass of sweet tea.
Posted by Morna Gersho at 10:51 AM 2 comments:

Be Careful What You Wish For

Friday we drove half the day to meet my daughter on a ten hour drive home from college. We met at some drive through and  I popped in my daughter's car and drove the remaining four hours home.  The plan was to break up the ten hour drive for her, but of course it turned into an opportunity for her to finish some course work. So I drove from Red Bluff, California to the Bay Area while she furiously typed away on her laptop,  finishing up some late assignment, cradled in her lap, sprinkling our monotonous drive w/animated asides.
She's home now, for the duration of the summer. Sister and brother are reunited. When she left three years ago the iceberg was just beginning to thaw between them.  Her love of pop culture, her  constant squeals/yells of excitement, her animal rights activism, and women's rights platforms were just beginning to not irritate him quite as much.   In a scant 24 hours both of them have re-assumed their sibling roles, that invisible hierarchy, just as if they have never been apart.
And the random socks are in the living room (where she did her yoga) and her threaders are by my sink ('' 'Cause your mirror is better,") and the idle talk about a certain song, or a new TikTok is beyond my comprehension but I listen intently, nod when appropriate, and feign understanding.  I so desperately want to belong to their club.
And I sleep better when they are home.  I love to see their doors creaked open at night, engrossed independently in their own worlds yet  inexplicably intertwined together unbeknownst to them yet so clearly obvious to me. 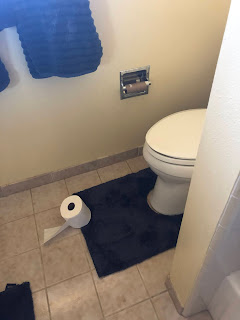 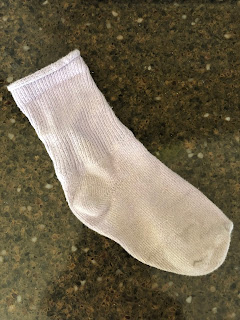 I found this last night while leaning over the bed, and patting my hand haphazardly on the shag carpet under my bed, in a vain attempt to find my glasses without swinging over the bed, and giving a proper search.
It is Emma's sock who is now 21, and no longer wearing these tiny lavender socks, nor the cotton short sleeved dresses that accompanied them, that she loved to slip on quickly on her way to our backyard.
As I held the tiny sock in the palm of my hand I marveled that she wore it at all?  The forlorn lavender sock coated with dust immediately took me back to our backyard and the myriad of activities there.  I closed my eyes and I could almost see all the sleepovers in tents ( complete w/lanterns glowing), chromatography tests w/M &M's on the picnic table, wild uninhibited sprinkler play on a blistery hot day, and colorful boats being carefully guided in a blue plastic wading pool, and so much more.
I closed my hand over the sock confidently and knew at least tonight I would not be wistfully wishing I could go back in time and do a "better job."  Tonight I would not second guessing my role as a mom and wondering if I should have done things differently.  Maybe, if I had just been a little more present, or focused a little bit more on them, they would have had a better childhood?  I smiled ruefully to myself knowing these thoughts to be unfounded, and carefully folded the sock and placed it on my nightstand.
Posted by Morna Gersho at 7:43 AM No comments:

We were told to simply "grab what we can," and when I stepped in that dark classroom I wasn't prepared for this wave of emotions.  I can't tell you how many times I have popped into my room over a weekend, winter break, even summer vacation because I needed something, or even had forgotten something.  It is always eerily quiet.  Things seem frozen in time. This time it was markedly different.

Fondly, I looked at Brady's red homework folder (which he had forgotten) and Anya had forgotten to put away both her markers and pens.  I touched them absentmindedly.

I  glanced at my post it, and gathered my things randomly.

I walked to the door, and came back to push in Aarav's chair.  I looked at our colorful PiKu poems on the whiteboard as I switched off the lights. "To be continued," I decided silently in my head. I propped the door open, balancing our classroom aquarium, and my book bag.  I never even heard the door close behind me. 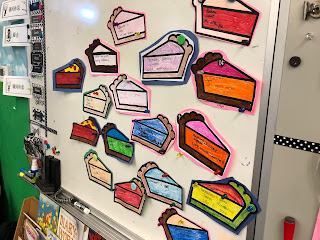 When the commitments begin to build, I begin to do my best impression of Chicken Little. This week's meetings combined w/an impending teachers' strike,  picketing (of course)  living/coping with a  teenage angst and then sprinkle that w/a wee bit of standardized testing prep at school- found me making my final step.  When the going gets tough I want to get going. .
I pull out my calendar, and start searching for a weekend that I can squeeze in a couple nights that will allow me to head up to our cabin. It's almost become an involuntary reflex.  I am never sure quite how I arrive at pulling out the calendar but I always get there when life has over asserted itself. Yes, I am so blessed to have an escape, but more importantly I also know when the camel's back is almost broken.
Posted by Morna Gersho at 11:07 AM 2 comments:

My mother was a concert pianist, and my father an English professor.  I was told as they dated that they frequently challenged each other, and my mother was known to quip, "Yes,  I will tell you all about William Faulkner as soon as you have told me all about Bela Bartok!" I thought my family was perfect, at least my mother was, until she got sick.
My father tried to take care of her, but ended up moving us away, and she moved back in with her parents, and then eventually ended up in a facility.
Years later during a  yearly visit to me, and her grandchildren, my father finally came over after declining many invitations to join us. He came awkwardly through the door, and stayed for dinner. After dinner he produced an Ortega weaving from Taos (purchased on an early trip together) and her favorite record- a ballet, Prokofiev's, Cinderella.  She took the record from him gingerly, though clearly she could not remember it. He was uncomfortable and I don't think I ever saw my father at loss for words before. They came out in monosyllables.  It was okay, though.  She had already forgiven him just as she always did. 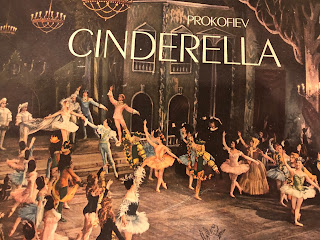